DeFi has been driving a cryptocurrency resurgence since 2020 with no sign of stopping.

But, what is DeFi and how does it work?

Decentralized finance (commonly referred to as DeFi) is a blockchain-based form of finance that does not rely on central financial intermediaries such as brokerages or banks to offer traditional financial instruments.

Instead, it utilizes smart contracts on blockchains, the most common being Ethereum.

So, now that you know what it is, how can you utilize this new technology in your own business?

That’s exactly what we’ll take a closer look in this special report. 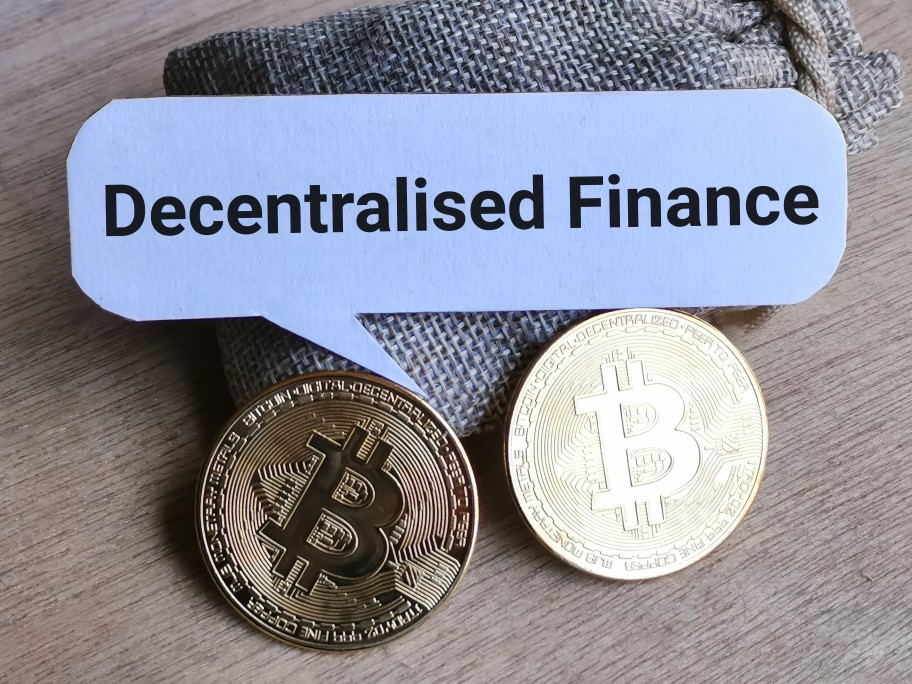 As mentioned on the introduction page, DeFi stands for Decentralized Finance.

This means that the financial services are carried out on a blockchain instead of through a brokerage or bank.

In today’s financial world, financial institutions act as guarantors for any transactions. This gives them immense power over your money.

Decentralized Finances are services with no central authority controlling them. Decentralized exchanges allow for peer-to-peer cryptocurrency transfers with no middleman.

Forkast News calls it “the merger between traditional banking services with blockchain technology.”

DeFi involves taking traditional elements of the financial system and replacing the middleman with a smart contract.

This means DeFi needs a decentralized infrastructure to run on, like the Etherium blockchain. This blockchain is a do-it-yourself platform for DAPPS or Decentralized Applications.

About 96% of DeFi protocols operate on Etherium, although a small number have migrated to competing blockchains because of increased speed.

In decentralized transactions, the typical overseers of those transactions (banks, stockbrokers, government institutions, etc.) are replaced by blockchain.

Because users don’t need to transfer their assets to the exchange, decentralized exchanges reduce the risk of theft from hacking of the exchanges.

They’re also more anonymous than exchanges which require your identity on all transactions and can prevent price manipulation or faked trading volume.

DeFi’s goals are to utilize technology to remove intermediaries between parties in a financial transaction. Its components are stablecoins, use cases, and a software stack that allows the development of applications.

This infrastructure and use cases are still in development, though plenty of users have jumped on the DeFi bandwagon.

The Rise of DeFi

DeFi’s origin is often traced back to 2015, when a platform called MakerDAO allowed people to utilize cryptocurrency for collateral on their loans.

DeFi, like the traditional cryptocurrencies, promises to do away with the unnecessary intermediaries like banks and stockbrokers. This viewpoint Is fueling the market lately.

Bitcoin was created in 2009 as an alternative to traditional finance (and financial authorities like banks and stockbrokers), but many limitations still exist.

While Bitcoin was meant to function like money, its functionality depends on a network of new central authorities that are acting much like the institutions they were meant to replace.

Miners, node operators, wallets, and exchanges—these authorities are showing a distinct proclivity for acting just like banks and stockbrokers.

In other words, Bitcoin doesn’t seem to be truly decentralized.

A true decentralized system should be run by the people alone. Bitcoin has given us glimpses of this but has ultimately fallen short of its goal.

With DeFi, there are no central authorities and protocol are run by smart contracts designed to eliminate foul play.

The open financial network is trustless and decentralized, facts that have attracted many investors.

Now that we’ve explained what DeFi is and what caused its rise in popularity, let’s look at some of the more notable applications for this protocol.

Decentralized Exchanges (DEXs): these are exchanges that operate without an intermediary.

With a DEX, users can connect directly with one another to buy and sell cryptocurrencies.

Any assets traded under a DEX are not held in escrow or in a third party wallet the way a centralized exchange would do. Some top DEXs include Uniswap, SushiSwap, and Curve.

These exchanges are not as popular as centralized exchanges, which are operated by a central authority.

Coinbase and Binance are examples of centralized exchanges and are custodial in nature because the buyers and sellers trust the central authority to keep their assets safe.

Lending Platforms: these use smart contracts in place of third parties like banks or stockbrokers. This allows lenders and borrowers to participate in an open system.

Proponents of DeFi claim that these platforms are democratizing the entire financial landscape.

In decentralized lending platforms, lenders can earn interest on cryptocurrency assets by loaning them out, while borrowers can assess liquidity without actually selling off those assets.

With our traditional financial situation, you must offer collateral before you can get a loan from the bank. DeFi is similar, but borrowers have to offer assets which add up to more than the total loan in order to obtain that loan.

Some of the top DeFi lending platforms include Aave, Maker, and Compound.

Prediction Markets: these allow you to bet on the outcome of a future event, such as a presidential election.

In fact, they flourished during the 2020 elections, with Augur recording a milestone volume of over $8 million.

Prediction market platforms act like traditional prediction markets, but with blockchain functionality, which means no intermediaries. Some examples include Gnosis, Augur, and FTX.

Yield Farming: this is the hottest new term in DeFi. It’s the process of locking up cryptocurrencies in exchange for some sort of reward.

The True Power of DeFi

Traditional banks are bureaucratic. They’re expensive to run, too. They take too long to process transactions—sometimes days—and have excluded many people from the financial system due to their stringent requirements.

Here are some of the benefits of decentralized finance.

DeFi opens the financial system to everyone regardless of race, income, culture, or geographic location.

All anyone needs is a connection to the internet via a smartphone or computer.

In 2018, the World Bank estimated that some 20% of the world’s population has no access to banking services. Mostly, this is because they lack required government-issued identification cards.

There are several DeFi platforms that allow these people to access banking services.

For example, you can take out a Maker loan without identification or even a credit score.

It offers interest rates for investors.

You can keep your assets like a traditional savings account if you wish, but DeFi also offers the chance to earn interest on your assets.

Platforms like Compound and Aave will let you deposit your cryptocurrency and then loan it out to borrowers.

At some agreed-upon time, you collect your interest on that cryptocurrency and can return your capital to the system.

Compound offers up to 4.3% interest on deposits from some tokens and Aave is offering as much as 5.73%.

If offers control over your own finances.

No one can ban you from a DeFi protocol. You have control over your own finances instead of depending on a third party to approve your loan.

While you do have to deposit your funds into the platform, what happens to those funds is up to you. The underlying smart contract takes the place of the traditional human intermediary.

DeFi allows a far greater degree of openness and accessibility. Since most of the DeFi protocols are built on the public ledger of a blockchain, every activity is available to the public.

Anyone can view any transaction, but these transactions are not tied to any individual the way they are with a traditional bank.

Also, users with programming knowledge can access most of the source code to audit or build upon, since these are open-source codes.

This type of code is of a higher quality and far more secure than proprietary software, thanks to community interaction.

One of the biggest reasons people without bank accounts can’t make financial transactions is that they lack documentation proving their identity, such as government-issued identification cards, credit cards, or passports.

This also prevents them from enjoying social benefits like owning property, which severly limits their opportunity for growth.

That barrier is lifted when you use DeFi. “Digital identities,” says Entrepreneur, “serve one of the essential components of DeFi.” A digital identity may be a profile that is linked to a device’s IP address, or a randomly generated unique ID.

It could also be tied to a user ID and password.

With this identification, any user anywhere in the world could buy, sell, loan, or borroy cryptocurrency.

The Downsides to DeFi

Nothing is perfect and decentralized finance is no exception. Here are some of the negative aspects of0 the platform.

The smart contracts which form the backbone of the DeFi platform are susceptible to manipulation.

By default, these contracts are open-source.

This design allows you to inspect and review them before making your decision to invest in the DeFi protocol.

Most DeFi protocols hand their contracts over to security firms for auditing—and that’s where they may run into trouble. Human beings can miss flaws in these contracts that might be exploited at some future date.

As an example, take a look at the DAO or Decentralized Autonomous Organization.

This investor-directed venture capital fund was launched in April of 2016. It quickly grew to become one of the world’s biggest crowdfunding platform, managing around $120 million.

By June of that same year, hackers had located and exploited a vulnerability in the smart contract.

They stole about a third of the funds, relocating them into a “child DAO” with the same structure as the parent protocol. It took weeks for some users to be able to access their funds, making this the largest hack in crowdfunding history.

This incident alerted the DeFi community and now, developers who build protocols ensure that their smart contracts undergo multiple rounds of auditing.

Data feed centralization: Blockchain protocols can’t access data that is off-chain. In order to remedy this shortcoming, many use third-party services called oracles. These allow access to needed external information.

As Forkast puts it, “Oracles serve as bridges between blockchains and the external world, relaying information to smart contracts for them to utilize.”

The major issue with all this is how to create a central trust point in a trustless and decentralized setup.

This can provide a vulnerability for the entire smart contract. If an oracle should broadcast the wrong information, it could wreak havoc with the entire system.

Let’s look at the case of Synthetix, for example.

This is a DeFi asset issuance platform. In June, 2019, an oracle transmitted false price feed information to the platform’s smart contract.

One user’s trading bot took advantage of this error and bought big, inflating the user’s balance, allowing that user to convert around 37 million Synthetic ETH (sETH) tokens—worth around $70 million! The company later reached out to the user, who agreed to reverse the transaction in return for an undisclosed “bug bounty.”

In September 2020, top crypto exchange KuCoin confirmed that hackers had transferred about $150 million in Bitcoun and ERC-20 tokens from its hot wallets.

Days after the actual event, blockchain intelligence software Elliptic did the math and discovered that the exchange had actually lost about $281 million.

The hackers laundered the funds through DeFi protocols Kyber Network, Uniswap, and others.